How you can make a toy boat that really floats

These toy boats really float, and would be perfect for a preschool unit, or high school science experiments in buoyancy.

The other day I wanted a couple of quick, cheap toy boats that would float. We were headed out out to our favorite puddle. Both of my little ones LOVE stomping back and forth through the puddle, and I love that their naps usually happen in a timely manner afterward.  However, our last puddle day had ended with swimming, and it's still a little chilly for that, even here in Alabama. So,to encourage wading in the puddle, I made a quick toy. 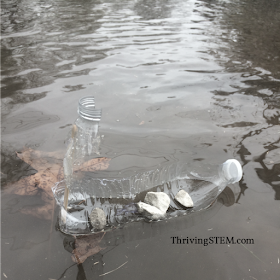 When we lived in an apartment and weren't fortunate to own our own puddle, I'd put my children in their bathing suits, and let them play in the bath on rainy days. These boats would work great there too!

I ransacked the recycling bins, and came up with these functional upcycled boats. The longest part of the project was waiting for my hot glue gun to head up. They took about a minute to put together, floated nicely, and were even cute.

How to put together your own toy bottle boats 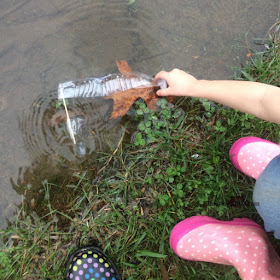 When you get to the puddle, add a few rocks for weight.

What children learn from playing with toy boats

It's pretty intuitive that kids should play with toy boats and splash in puddles. It builds their gross motor abilities. It satisfies their sensory development. It's just plain fun.

Did you know they're learning science too? 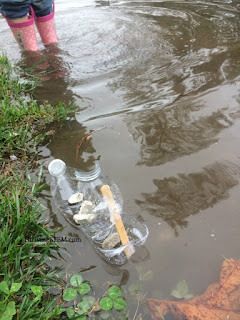 As the boats move around the puddle they are influenced by the breezes and by the currents in the puddle. They float due the buoyant force of the water. Check out my post "Why boats float" for more information.

My girls are just happy that they got to play with their boats. I'm pretty excited about what they're learning- and that they took their naps. 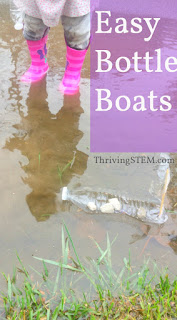 Learn more about Why Boats Float