What’s the best way to help your student learn the multiplication tables? You might be a teacher who is puzzling over those three students who didn’t get it with the rest of the class. Or, you might be a parent who never trained as a teacher and now needs to make sure that your child is taking this critical step in math.

Math facts can be boring, but it’s also a little scary if you have one of those children who struggles to memorize what comes so easily to everyone else. When you have a smart student in front of you who is still struggling, it can make you feel inadequate, even if you were successful at multiplication yourself.

Thankfully, there are proven ways that help students make this important math milestone.

Understand the Concept of Multiplication First

One of the common mistakes when it comes to multiplication is jumping straight into drilling facts.  Before you settle in to trying to teach your child to recall facts efficiently, make sure they understand what multiplication is.


What should students know before learning multiplication?

To help your child master multiplication, you’ll want to be sure that they have a foundation in more basic math first. Can they recognize groups of items as containing a certain number of objects?

Next, have they mastered addition? Multiplication can be thought of as a repetitive form of addition. If students haven’t internalized the concept of addition, they will struggle to understand multiplication.

While you may occasionally want to assess a child’s proficiency by asking them for random facts, you won't want to teach in a random order.Multiplication, like all math, should be taught as a system of patterns..

Most students are able to understand skip counting by two’s pretty easily. Expanding on that pattern one at a time is a natural way to introduce the tables. Zero and one are a little weird. Once the student has mastered the other tables, the zero’s and one’s will seem like a fun joke.

The facts within each table should also be introduced in order. For example, if you are working on the sevens table the facts should be introduced as 7 X1, 7X2, 7X3 etc. This enables the student to build on their understanding of addition and store the facts in their brain in an orderly way.


How to teach multiplication 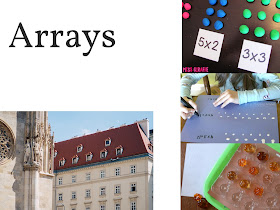 How to build arrays from Miss Giraffes Class. Here are several ways to approach arrays. The playdough looks especially fun to me.
Pumpkin Patch arrays from School Time Snippets You can use any small objects that go with your current theme, or have around the house to do this great activity.
Polar Bear arrays from Still Playing School. This is a memorable approach for your animal lovers. 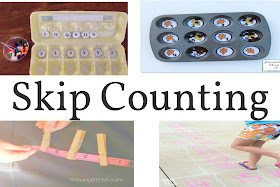 Snail printable from Artsy Mama *Be sure to check out this clever activity.
Lego Grouping from School Time Snippets

Some times tables have “tricks” associated with them. It’s worth your time to go over these tricks, not just because they will help your child learn multiplication faster. These so called tricks are actually patterns. Math is fundamentally about patterns, so students who understand these tricks at a fundamental level will understand math more deeply.

The ones
If you have one pile, what you have is what is in that one pile. If you have one in each pile, then your total number is the same as the number of your piles. So, anything times one, is that number back again.

The twos
Two is a matched set, so reciting the twos table is the same as listing all the even numbers.

This pattern is a little more surprising. Once you have memorized the first three multiples of three (3,6,9) you can recognize all the other multiples because if you add the digits together, they’ll add to a previous multiple of three. Try it!

One reason students struggle is that information has been presented abstractly, but they prefer to think concretely. They may understand the math on a nonverbal level, but struggle to name the quantities with numbers.  People such as Albert Einstein and Charles Schwab are famous nonverbal thinkers, so don’t make the mistake of associating symbolic aptitude with mathematical ability.

While the student is working on the multiplication review activity, have them do as many of the following as possible.
-touch each part of the equation
-say the equation out loud
-look at a visual representation

Some learners need to do all three of these concurrently in order for their brains to retain the facts. If you are working in a classroom, consider drilling fact out loud as a class while incorporating a visual each student can touch. Or, set up one of these activities as a center where students can talk quietly to themselves.

Some students struggle with multiplication because their brains are overwhelmed by holding  three numbers at once. For these students skip counting is the key. Teach these learners to skip count, and use either their fingers or a number line on a page to keep track.

In some paradigms mastery of math facts is obtained when the student can “fluently” multiply. That means that their brain goes through the process of recall directly from the question (5x4=) to the answer (20).  The common, although arbitrary, rule of thumb is three seconds.

Some students will learn the most basic multiplication facts, perhaps the twos, but then build on those facts in order to recall the more complicated facts. For example, the fours can be found easily by doubling the twos. While this method takes a little longer, some researchers believe that it is actually more desirable in training students to excel at math in the long term.

Jo Boaler, a professor at Stanford University argues in her paper Fluency without Fear that practice through use of math facts is the key to true student understanding. Simply memorizing the facts has little to do with ultimate mathematical ability.


In order to reach mastery, a lot of practice is required, and there is no reason that practice shouldn’t be fun.

Frog skip counting game from Artsy Mama
Math war game from Mom to 2 Posh Little Divas
Power Towers from Fabulous in Fifth
How Close to 100? from You Cubed

Polyup. Combine the two numbers just above the function to produce a new answer. Once your student gets going they’ll enjoy modifying equations to do various tasks. This game is best for students that are comfortable with numerals. It helps students develop a flexible way of thinking about and mastering multiplication facts.

Wuzzit Trouble This game eliminates the equations, as players use various size gears to free the Wuzzit’s from their cages.
The Multiplication Course is a free YouTube based curriculum that leads students through a variety of visualizations and activities to help the conceptualize multiplication.

Try these free fun multiplication songs from Planning Playtime.
Math You see also has a math songbook that you can purchase.


You can take the frustration out of learning the times tables for your student. By helping them understand the basis of what multiplication is and providing practice opportunities that work with their natural interests you'll make it possible for your child to succeed at multiplication.

Would you like even more practical help for your child's math journey? The Parents Math Toolbox is a video based tutorial service that answers to your child's math needs. During the month of August you can try it out free as part of our summer pilot program.